A Brief History of The Colony, Texas When it comes to buying a new home, location and livability are key. At Taylor Morrison, we know finding a new home that fits your unique lifestyle is important.

That’s why Waterford Point at The Tribute, one of Taylor Morrison’s flagship communities in the Dallas area, is nestled amongst a serene setting along Lake Lewisville in The Colony, Texas, a town full of rich history in one of the most desirable locations in North Dallas.

Close to modern conveniences like shopping, medical and dining destinations, Waterford Point is a beautiful, lakefront community that truly offers something for everyone.

Read on to discover how this beautiful town came to be and how The Colony has transformed into the vibrant hub that is home to Waterford Point today.

The land later became home to the Texas Agricultural, Commercial, and Manufacturing Company, of which Henry O. Hedgcoxe was appointed as land agent. Colonists were not fond of Hedgcoxe, and a group planning to seize the land records and force Hedgcoxe out of his position raided and burned down the land office. This incident is now known as the Hedgcoxe War of 1852.

Peters Colony was renamed Camey Settlement in the early 1900’s. By the 1940s, the land had a school, a grocery store and a cotton gin. Some of the original settlers are buried in the Bridges Cemetery located on the eastern side of what is today known as The Colony.

Today, The Colony is home to around 40,000 residents and continues to let its rich history shine through historical landmarks and street names named after original land owners.

Waterford Point offers four home collections ranging from approximately 1,600 to 3,787 square feet and offers features like courtyards, covered porches, media rooms, spacious master suites, guest quarters, ample outdoor living spaces and up to three-car garages. All floor plans are single story with some plans offering a second story option and are available on home sites that can stretch up to 76 feet wide.

Waterford Point is conveniently located near major highways for quick commutes. Frisco, Plano, Carrollton and Lewisville are nearby, offering tons of everyday conveniences close to home.

For more information about Waterford Point at The Tribute, please visit www.waterfordpointliving.com.

Experience Destination Living at Waterford Point at The Tribute 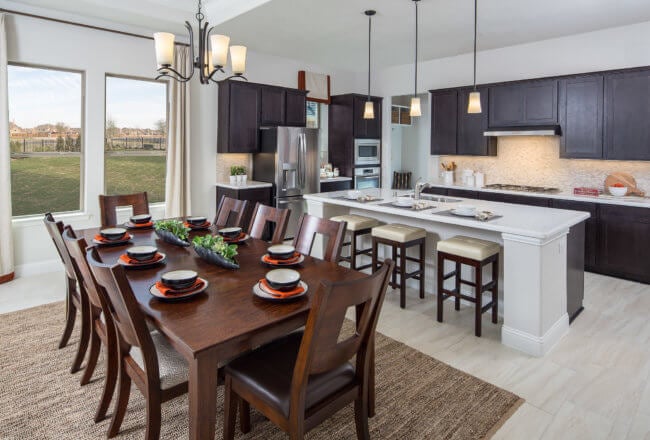