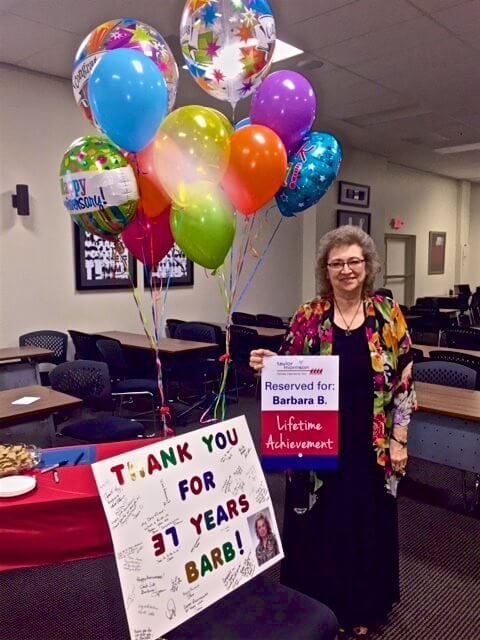 Barbara Beauchamp has been with Taylor Morrison through it all. The accomplished staff accountant recently celebrated her outstanding 37-year anniversary with the company alongside her beloved team, where she received her own portable parking sign which reads, “Reserved for Barbara B. Lifetime Achievement.”

Barbara began her employment with George Wimpey of Texas in 1979 shortly after they entered into the U.S. market. At the time, the division had less than 10 employees and Barbara was involved in each aspect of the business.

Donna Paradoski, who has worked with Barbara and for Taylor Morrison for more than 30 years, recognized Barbara for her instrumental work in helping to develop Taylor Morrison into the nationally-recognized company it is today.

Over the years, Barbara has been through six office moves with the company, three software integrations, one merger, one sale and a public offering.

“Barbara has worked closely with our title companies, engineers, attorneys, MUD Districts, taxing authorities and vendors,” Paradoski said. “She has run the office, planned special events, worked with our corporate offices in the U.S., UK, Canada and so much more.”

As Taylor Morrison continued to grow and evolve over the past 37 years, Barbara says one thing has always remained the same, the culture.

“Since the beginning, this has always been a great company to work for,” Beauchamp said. “I’ve worked for some really wonderful people and that makes a big difference.”

“I’m in charge of the accounts payable,” Barbara said. “I make sure all of our vendors get paid. A lot goes into this, but that’s the most important part of what I do.”

While her team agrees that her given role is crucial to the success of the company, her co-workers believe that Barbara’s drive and commitment, kind-heart, contagious personality and outstanding example of dedication are what impacts the company the most.

As for the future, Barbara doesn’t plan on slowing down anytime soon, but when she does, it’ll be with her family at her beloved ranch in Grapeland, Texas. Married for 50 years, with two children and three grandchildren, her family’s ranch is her favorite place to call home.

“This has been a wonderful place to work, and I plan to work as long as I can,” Beauchamp said. “But when I’m done, I’m going to retire and spend my days at our ranch.”